ISS vs ISIS ~ Worlds away

Ancient Palmyra is threatened with destruction by ISIS

The acronyms of ISS and ISIS get mixed up and interchanged in my mind when I am reading my newsfeed on Twitter. The two sets of letters are so similar yet what they represent can’t be more different.

I was just struck by a beautiful set of tweets from astronauts on the International Space Station (ISS) that showed what thunderstorms looked like from space. It was a beautiful visual display of our wondrous planet and its beauty that can be seen from up above, day or night.

I was once opposed to the uneven spending that readily goes to space programs by several governments when compared to meager humanitarian spending that was direly needed here on Earth.  I was naive in thinking that less spending on research and development and exploration of space would automatically mean more spending on humanitarian and development programs in our world.  That may not be true at all, it is far from being a U tube phenomenon.

Then I watch with dread the advance of the expanding dark cloud from the depths of hell called ISIS in our Middle East region. I can’t help but note the stark difference with ISS in what it stands for and signifies, in beliefs and practices. I am however thankful for ISS and the funding that went into making it a demonstration of what we as a human race can accomplish together. Then I see an opposing ugly reality of how that same human race can be when we observe ISIS and its atrocities on a daily basis.

A group of Astronauts and researchers from several nations, some of whom were previously warring, cooperate and work together for the advancement of human knowledge and science.

Meanwhile…down below in the deserts of our Arab land that historically gave the world so much in terms of science, mathematics, astronomy, literature and medicine, a group of intolerant ignorant thugs are doing away with a proud heritage and history of accomplishments in the name of nothing but intolerance, thirst for power and rejection of the other. The group up above is researching and studying in a space lab to own the future, the group down below is killing, pillaging and maiming to recreate the worst part of a distant past.

I can’t help but be frustrated by the comparison and what it means for the region’s populations, especially the younger generation in the Middle East.  Then in the midst of the darkening reality a bright light shines, illuminating the darkness. I read about the space exploration plans by the UAE, the plans for a Mars explorer aptly called ‘Hope’, and the world and our prospects as a region slowly become more promising and forward-looking. A few Arab nations’ investment in education, science, renewable energy, scientific research start coming slowly into focus and dwarfing the disturbing vile ISIS movement that is hopefully going to be self-destructive and rejected by a populace longing for a better future.

To the residents of a region where the skies are clear most of the year, where our star-studded skies dazzle our eyes every evening, I say ‘Look UP!’. And wave, one of our scientists might join ISS soon. And she or he might be waving back when overflying our lands. 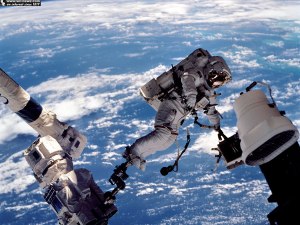